Johnny Cash – I Walk the Line

Recently finished this commissioned painting of Johnny Cash. It’s going to be a surprise gift for someone special. I am grateful to have had the opportunity to create something memorable.

Red, black and iridescent silver acrylic on 28 x 22 x 1.5 gallery wrapped canvas. Image wraps around and is continued onto the sides. Features song lyrics and sheet music to I WALK THE LINE on the background. Splashes and splatters of black and silver paint.

The image wraps around the canvas on 2 sides. What you don’t see is the silver glimmer and shine of the iridescent paint as it catches the light. As always I think it looks better in person.

“I Walk the Line” is a song written and recorded in 1956 by Johnny Cash. After three attempts with moderate chart ratings, it became Cash’s first number one hit on the Billboard charts. It reached number 17 on the US pop charts. It remained on the record charts for over 43 weeks, and sold over 2 million copies.

Johnny Cash – I Walk the Line

I find it very, very easy to be true
I find myself alone when each day is through
Yes, I’ll admit that I’m a fool for you
Because you’re mine, I walk the line

As sure as night is dark and day is light
I keep you on my mind both day and night
And happiness I’ve known proves that it’s right
Because you’re mine, I walk the line

You’ve got a way to keep me on your side
You give me cause for love that I can’t hide
For you I know I’d even try to turn the tide
Because you’re mine, I walk the line

As usual, I immersed myself in the music of Johnny Cash while drawing and painting this. Thanks to Spotify, I was able to listen to hours and hours of his music easily. As part of my preparation for painting the piece, I also learned a lot about the history of the man. Much like an actor immerses themselves into the character for the role they are playing. I learn about my subjects when painting them. It helps me flesh out who they are. For instance, Johnny Cash had a scar on right side of his face. That came from having a cyst removed when he was in the Air Force. When I painted that portion of his face I knew that it had to show, because that was a part of him. He also monitored the Russian’s Morse Code chatter announcing the death of Joseph Stalin.  Perhaps it’s these little details that help me to know the essence of the person I’m painting?

Well if you’re reading this know that I’ve been quiet this past week due to the threat of fires here in Northern California. Things seem to be a little better now and we can let down our guard a bit. Hope to get back into the studio real soon…

What’s Behind the Mask? 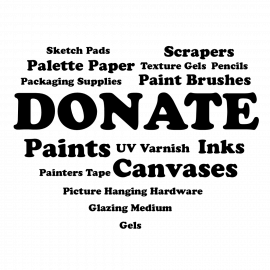 You can add your support here

Get 10% off any painting! Plus, the quarterly newsletter gives you access to studio discounts, art downloads and more.